There are many great things about social media, but there are definitely some pretty crappy elements too.

One of those crappy elements is the tendency of people to use their news feeds to promote their business. You see this on Facebook, LinkedIn, Twitter – someone puts into their feed a blurb about their company or their professional life:

It takes the self-glorification that already pervades social media – “look how great my life is!” – and adds a professional component. Seeing these items in a friend’s news feed, where I can’t avoid them, is sort of like the friend giving my email address to a spammer, but instead of some stranger peddling me Viagra, it’s my own friend doing the spamming.

When you bring money and career into the news feed glory wall, it commercializes friendships; people are turning friends into customers. And I’m not sure that transformation is reversible. Once you’ve monetized our relationship, can I ever see you as just a friend again?

Viral Growth & User Base Do Not a Business Make

Everybody in business wants to “go viral.” If you create a funny YouTube video, or tweet cleverly, or create a web service that people invite their friends to join, then you will spread like a flu pandemic, generating massive growth in users without massive marketing expenditures. Whether you are Old Spice or Dollar Shave Club or Instagram, growth without marketing expense is a good thing. And I agree: it IS a good thing. Going viral is awesome for a business, of course. Achieving growth without buying it is clearly good.

But companies are also learning that growth itself is not enough. A user base is not a business. If you can’t make money off those users – both revenue and profits – then all your viral growth is kind of a waste. We saw this last week with Facebook, which has had huge viral growth over its lifetime, and now has a billion users, but is having problems turning those users into money, leading to a stock chart that looks like this:

Or take the Dollar Shave Club. Their video is definitely hilarious and it went viral, which allowed them to sign up lots of users. But if their razor isn’t good enough to keep customers ordering more, or if they can’t sell the razor for more than it costs to make, no amount of viral growth will help them be a successful business. I haven’t heard anything about their razor quality, or their margins; they could totally succeed, and I hope they do. My point is that a clever viral video is only a means to an end. The end is a profitable business.

In the social bubble we have seen this year, people have been losing sight of what really matters in business: profits. User growth and virality are to 2012 what eyeballs were to 1999. Having lots of users is good, and your user base is an important metric to track, but at the end of the day, you need to make money. Not making money is what pops bubbles.

Move Fast And Break Things. Like Your Customers’ Hearts?

Move Fast And Break Things is Facebook’s unofficial (or maybe official) motto. It’s part of the hacker ethos, and I get it. You need to try to new things, not follow established patterns, if you want to create really innovative products. “You would never build something great doing it the same way others have done it,” said Mark Zuckerberg.

Except, what if you move so fast that you break essential things? Facebook’s replacement of user emails with Facebook email address was not only a typical Facebook PR disaster, but it turns out that there was a bug so that some smartphone users had emails replaced not just in Facebook, but in their contacts too. So that they were sending emails to people’s Facebook addresses without knowing it. Facebook addresses that recipients don’t check. It was a complete clusterfuck, and users are rightly pissed. How many users ripped their Facebook app right out of their smartphone after that? And how many other users who were thinking about installing the app decided not to?

“Breaking things” is great unless your customers actually rely on those things. Then you are just breaking your bond of trust with your customers. And you never get that back. 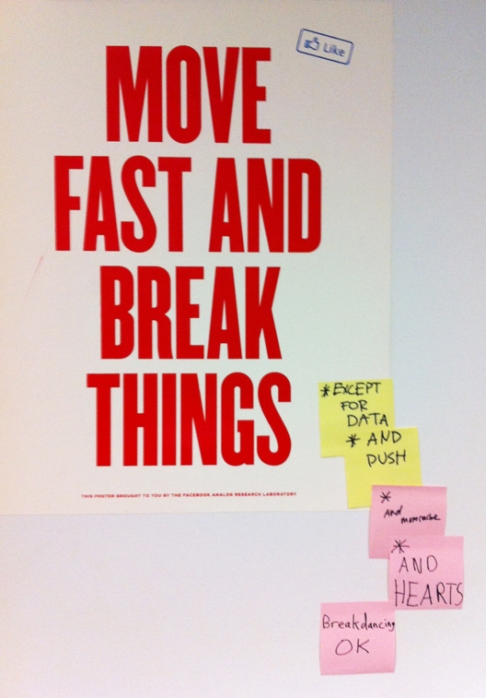 As the non-film press reviews The Social Network, their gloss on the film is driven, not surprisingly, by their philosophy of business. For example, in The New Republic, Lawrence Lessig focuses on how net neutrality enabled Facebook to thrive, because he is a fiend for net neutrality. [Sidebar: his argument makes no sense (typical of Lessig), because Facebook is a low bandwidth application, and net neutrality issues are all about bandwidth intensive applications.] The Wall Street Journal aims more at the lawsuits against Facebook founder Mark Zuckerberg, because it hates anti-business lawsuits (tort reform is one of the Journal’s pet causes; of course, lawsuits by businesses against regulatory agencies are fine) and loves the free market, and nothing is more free market than a successful entrepreneur. TechCrunch also criticizes the lawsuits, not so much from a tort reform perspective but from the Silicon Valley perspective of the heroic entrepreneur who works harder and succeeds; the money quote from this review is when it criticizes the Winklevoss twins because they “spend the majority of the movie demanding compensation over a site that they didn’t build.”

Both the Journal and TechCrunch minimize the lawsuit aspect and emphasis Zuckerberg’s execution of the idea. And to be sure, he executed brilliantly. There were already social networks out there – Friendster and MySpace – and yet it’s Facebook that’s the big winner. Facebook had superior technology, design and social elements, all of which helped it succeed. But to dismiss the Winklevoss claim as a mere “contract dispute” as the Journal does is to slant the story to make a political point. If the claim is true (obviously, I don’t know the facts, but Facebook did pay the twins over $60 million to settle the claim), Zuckerberg signed a contract to build a site for the twins, but instead of working on that site, he stalled the twins while he built a competing site. That is much closer to theft than to a contract dispute. Again, Zuckerberg won on execution, not on theft, but let’s not let that execution disguise or obviate any devious behavior that led to Facebook’s creation.

That is the claim of Dan Lyons in the recent Newsweek, wherein he claims that the trend of consumer internet companies (Facebook, Twitter, Zynga, etc.) making gobs of money by doing essentially shallow things will draw engineers and entrepreneurs away from solving the hard problems that have traditionally driven Silicon Valley.

Erick Schonfeld at TechCrunch disagrees, saying that Facebook and its ilk aren’t shallow and are also technically hard, since they have to scale to support so many users.  Most of Schonfeld’s article is, quite frankly, dumb (I mean seriously, using anti-virus software, which solves a real and burdensome problem, to show that internet companies are useful too, is nuts. And saying that Twitter’s many-to-many communication is a bigger tech achievement than the telephone network…dude, do you even know anything about technology?), but I appreciate his viewpoint and that of the many comments his article generated (as usual with comments, they are split between wisdom and inanity).

It won’t surprise regular readers of Thoughtbasket to learn that I come down somewhere between these two poles. I wrote a post on this very topic recently, riffing off a former Gartner analyst who said pretty much exactly what Gross said. Yes, Facebook makes people happy, and some of the technology required to build it to scale might help build other products. But it’s basically a toy, and the technology isn’t that innovative. More importantly, it sure isn’t curing cancer or solving the energy problem.

It’s OK for fun products to do well; Facebook and Zynga make tons of money because people love using them. But Lyons makes a good point: the wealth and attention being lavished on these fun products could lead smart people to build ever-shallower products (hello Foursquare) instead of solving big and important problems. Silicon Valley is a big place, and there seem to be a lot of entrepreneurs attacking all sorts of problems, but the tendency of the press (particularly TechCrunch) to focus on consumer internet companies as if they were the only things of note in Silicon Valley adds to the problem Lyons describes.

With Big Kahuna Facebook launching its own check-in service yesterday, the commentariat is chiming in. Here is a nice article from Wade Roush noting that A) Facebook wins, and B) it wins because it’s useful, rather than a novelty. You know I love posts that agree with mine!

Just two days ago I wrote about super angels potentially crowding out VCs in the funding of technology companies, and I noted that this dynamic was mostly relevant to consumer internet companies rather than hardware companies. And I didn’t even mention biotech, medical device or energy companies, most of which take far more capital than even the superest of angels could provide.

Now, lo and behold, a former Gartner analyst comes out with an article about how Silicon Valley is too focused on consumer internet, on “the glitz and the superficial,” rather than on solving big problems, like medical and environmental ones. He notes that the new innovators in those areas are big companies, who are focusing their R&D budgets on these big problems with big markets, rather than entrepreneurs, who are focusing their energies on figuring out the best way to get you to “check in” at your local bar.

Om Malik has a great post today on Google’s utter inability to compete in the social media world, as evidenced this week by the company shutting down Google Wave, which was a complete flop, and the sad purchase of Slide for $200 million.

I recently posted about the risk that Google’s culture poses to its future success, and Malik makes the same point, noting that Google simply doesn’t have social media in its DNA. He says that algorithms can’t factor in empathy, which is another way of saying that hiring only engineers doesn’t guarantee future success.