So that I can post video of terrible drivers and parkers. Check out the horror of Spruce restaurant and Sysco food delivery here. 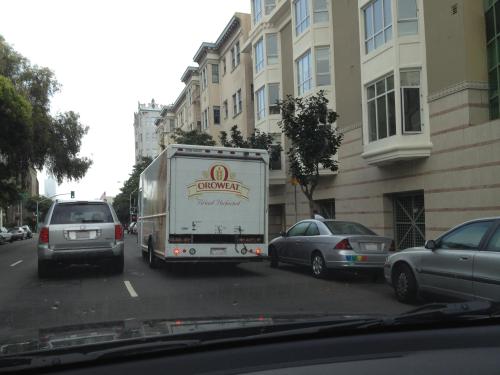 This is on a major east-west artery in San Francisco.

What if the Terminator was wrong, and Skynet doesn’t plan to eliminate humans via a nuclear apocalypse, but through a global pandemic? 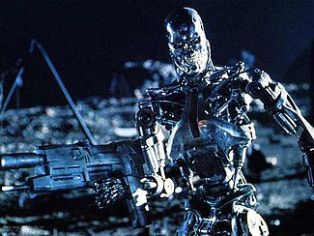 One way that Skynet can kill us all

Below is a photo of the electro-mechanical soap dispenser in the bathroom of my office building. Notice how it has dismantled itself, so soap is no longer dispensed. An entire floor of workers has stopped washing their hands, and it’s just a matter of time before someone gets sick.

Was this faucet designed by Cyberdyne?

As Jude Law learned the hard way (see photo below) in Contagion, it just takes one sick person to start a massive epidemic, killing off vast quantities of humans. If (when?) Skynet becomes self-aware, how do we know that the smoking gun will be in the shape of a mushroom cloud? Maybe it will be in the shape of a sneeze or a cough, a high fever and some agonal spasms.

Another way for Skynet to wipe us out

Posted on January 9, 2013 in Uncategorized

Here is an interesting take from economist Dean Baker, pointing out that while US immigration policies let in lots of low-skilled workers, driving blue collar wages down, our policies make it very difficult for skilled workers (doctors, lawyers, economists) to enter the US and work, keeping white collar wages high. Coincidence?

There is a growing trend among universities to devote resources to studying entrepreneurship. This trend is primarily focused in the business and engineering departments, but it is spreading inexorably across campus. It seems as if everyone wants to create a new class of entrepreneurs. This impulse is understandable; after all, if you are the university that graduates the founders of the next Google, there are big donations in your future.

But this focus on entrepreneurship doesn’t come without costs. Universities generally don’t have limitless budgets, so if increased resources are flowing to entrepreneurship studies, that means resources aren’t flowing into other departments. At my alma mater, Stanford University (see below), our alumni magazine seems to be constantly writing about new initiatives to train entrepreneurs, but it almost never talks about a new program in English or history. I think that universities’ movement toward entrepreneurship has gone too far.

But more important to me is the fact that there is more to a university education than just training for a future job, whether as an entrepreneur or engineer or ethicist. College is also about producing well rounded people, who can analyze life in a variety of ways, who are prepared to be good citizens of their country. And I’m not the only one who thinks that way. Thomas Jefferson founded UVA with the goal of “elevating the views of our citizens generally to the practice of the social duties and the functions of self-government.” John Adams thought that education was so important that he put it in the Massachusetts constitution:

Wisdom, and knowledge, as well as virtue, diffused generally among the body of the people, being necessary for the preservation of their rights and liberties; and as these depend on spreading the opportunities and advantages of education in the various parts of the country.

If people want to start companies, they will certainly do so. They always have. So let’s not waste their four years of college making them “better entrepreneurs,” as if we even know what that is. Let’s just make them smart, well-educated people, and the entrepreneurship will inevitably follow.

We’ve all heard about the ozone layer, but I reckon that most people know very little about ozone. I knew pretty much nothing about it until I read an article published by the National Bureau of Economic Research which tied ozone levels to reduced worker productivity.

It turns out that ozone is a molecule consisting of three oxygen atoms. It also turns out that ozone is known to cause respiratory problems. It is chock full of free radicals, and ozone doesn’t react well with cells in your lungs. Yuck. Health organizations (EPA, WHO, etc.) set exposure standards levels that should prevent long term effects. Of course, those standards are based on the science at the time of promulgation, and science can change, as is true for all health regulations.

However, as the NBER article shows, sometimes economics can reveal patterns that medicine doesn’t. Economists from UCSD and Columbia studied ozone levels in California’s central valley (a huge farming area) and compared those levels to farmworker productivity. It turns out that increased ozone levels are correlated to decreased productivity. Moreover, this productivity impact happens at levels well below the federal safety standards. So maybe the standards are wrong, and ozone is more toxic than people think.

I admit that this study is a little on the Freakonomics side of things: it runs a regression, sees a correlation and assumes causality. I have been critical of Freakonomics in the past (although not on this blog), because I don’t think you can just regress a boatload of data and then decide that you know why result A happened. There could be all kinds of other factors at play in this data; for example, maybe ozone levels are high when the weather is really hot, and farmworker productivity was down because of the heat, not because of the ozone at all. Hopefully the economists doing the study adjusted for that sort of thing, since zeroing out the noise of exogenous variable is a standard procedure in studies like this, but the article doesn’t say. Any way you look at it, this certainly is an interesting correlation that could bear further study.

As an aside, here is a critique of Freakonomics from the American Scientist; they are more qualified than I am. 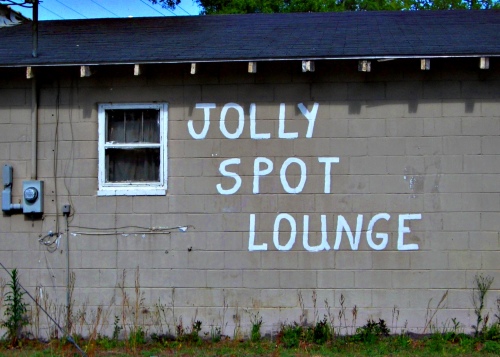 I recently wrote a post discussing the differences between North and South. Taking as my starting point Anne Applebaum’s article about well-budgeted Northern European countries vs. profligate Southern European countries, I extended her theme to discuss Northern hemisphere vs. Southern, and Northern states vs. Southern states here in the US. Now I want to continue my riff and see if I can expand even further on this latitudinal dichotomy.

Can we call this dichotomy a civil war of behavior? And if we do, does the allusion to America’s Civil War help or hurt? Certainly one could make a case that the American South, by building an economy on the backs (literally) of slaves, enabled a profligacy that wasn’t really warranted. An economy built on the untenable foundation of slave labor is sort of like building the economy of Greenwich, Connecticut on the false profits of Wall Streeters trading sham mortgage securities, or building the economy of Greece on money borrowed from other countries and then stolen from the national treasury. People still get to buy their Maseratis, but they haven’t really earned the money.

What explains this broad gap between North and South? Or is North v. South even the right distinction? After all, Australia and New Zealand are pretty far south, and they are generally well run. South Africa is also way south, and even has south in its name, but it’s the best run country in Africa. Maybe the proper axis to examine is equatorial v. non-equatorial.

In my (admittedly limited) traveling experience, it does seem like tropical lands generally have a relaxed attitude about life. This relaxed attitude could easily become profligacy or corruption, or apathy regarding profligacy or corruption among leaders. Perhaps it is the ease of living in these climates that engenders this relaxed attitude. I mean, if you can wear shorts and flip flops all year round, and crops grow easily, why wouldn’t you just hang loose and relax? Compare that to Germany, for example, or Massachusetts, where there are seasons and snow and you have to bundle up and carefully plan your crops. It stands to reason that cultures in these more challenging environments would consequently be more organized and open to austerity. 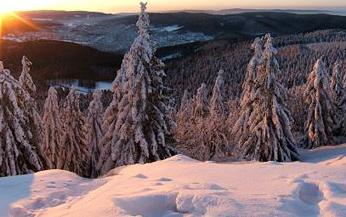 I should note that I have no data to back this up; I am purely using deductive reasoning. I should also emphasize that I am NOT saying that tropical cultures are bad, worse, corrupt, inferior, or any other pejorative. I am purely noting that if your climate makes it that you don’t need to worry or plan, you probably won’t worry or plan that much.

There is a new book out called Because It Is Wrong: Torture, Privacy, and Presidential Power in the Age of Terror. Written by Charles Fried, a Harvard law professor who served in several legal roles in the Reagan administration, including Solicitor General, and his son Gregory Fried, a philosophy professor at Suffolk University, the book explores “the ethics of torture and privacy violations in the Bush era.”

Harvard Magazine recently ran some excerpts from the final chapter, where the Frieds move off of torture per se and more into the general obligations of a president to the people.

They discuss that at times a president might break the law because he thinks the law will not allow him to do what is necessary to save the country, as did Jefferson in 1807 and Lincoln in 1861.The Frieds liken this law breaking to civil disobedience, with “a fundamental allegiance to the political community and its system of laws and government.” Executive law breaking while maintaining ultimate fidelity to the state and its system is civil disobedience; law breaking outside this fidelity is a coup.

But the Frieds also emphasize that civil disobedience, with fidelity to the state, requires admitting your law breaking. Like civil rights protestors who willingly went to jail, executive law-breakers under the Fried model…

“…break the law in a way that emphasizes their allegiance to the rule of law and the existing system of laws and institutions in general, with the exception of the law or set of laws in question. They break the law openly. They break the law reluctantly only for reasons of deep principle and in situations of great urgency, after making a good faith effort to change the law by legal means. They do not resist or avoid the representatives of the state when they arrest them. The practitioners resist by pleading their case in court, and they accept their punishment if the court goes against them, trusting that their fellow citizens will see the light eventually.”

The Frieds note that unlike MLK, a president takes an oath to uphold the law. Yet quoting Aristotle, they claim that the law cannot always foresee what is in the public interest. But if the executive gets to decide what is in the state’s best interest, what is to prevent the executive from becoming a tyrant? Here is where their call for open law-breaking is essential. The risk of being found guilty by the jury of citizenry will keep executives from going too far. “A chilling effect is exactly what we need when it comes to the rule of law.”

In other words, the Frieds believe that an executive law-breaker should stand up and say “yes, I did commit that act” and let the citizens decide. They compare this, unfavorably, to the law-breaking in the Bush administration, wherein the law-breakers to this day refuse to acknowledge what they did. The Frieds make clear that they are not necessarily calling for prosecutions of Bush officials; they only point out that “there is a great danger to secret executive lawbreaking. What is done in secret could metastasize into the arbitrary, lawless power of the tyrant—as it did in the Weimar Republic, with Hitler’s rise to power.”

Thoughtbasket
Create a free website or blog at WordPress.com.