The Myth of the “Job Creator”

A key Republican talking point is that the wealthy are “job creators” and that any tax on these job creators will cause them to fold their cards and go home, hurting the economy in the process. This is clearly ridiculous, and I have challenged before the concept that tax rates diminish incentives to build companies, but here is a great essay from an entrepreneur and investor (a successful one — he is clearly in the 1%) describing how people don’t create jobs, the economy does. And the economy is made up of regular folks — the 99% — who need to buy the products produced by the entrepreneurs. Without a successful consumer class, nobody will be a job creator.

He’s a Nobel Prize winner, so he must be smart.

Despite all the rhetoric out there about free markets and entrepreneurship and meritocracy and winners getting just rewards, results from a new survey (done by a professor at Harvard Business School, the fountainhead of free enterprise) show that Americans actually want a more equal distribution of wealth. Moreover, it turns out that most Americans have no idea how unequally wealth is currently distributed.

I posted recently about Timothy Noah’s long piece on income inequality; now he summarizes the results of the aforementioned survey. The survey shows that Americans generally think that the richest 20% of us own 60% of the wealth. In reality, the richest 20% own 85%. The survey also reveals that when shown graphs illustrating America’s income distribution, Sweden’s income distribution and an equal distribution, most American’s chose the Swedish graph. The equal graph was second, and the actual American graph came last. 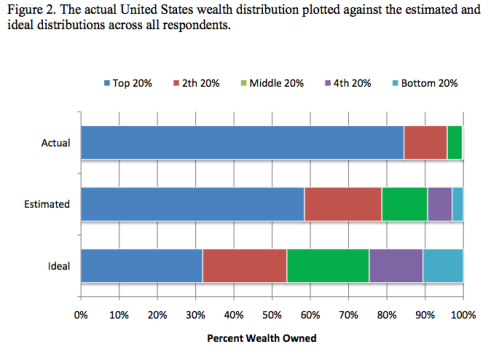 Americans very clearly want a more equal distribution of wealth than they have now. They aren’t agitating for it because A) they have no idea how unequal things really are; and B) there is an aspirational optimism in Americans whereby they always think that they will end up at the top.  But the next time some Tea Partier or Fox pundit starts talking about how Americans love the current system and are totally OK with hedge fund managers making $1 billion per year, remember this graph.

Here are links to two long and thoughtful articles worth reading.

The first is Timothy Noah’s ten-part (yes, 10!) piece in Slate on income inequality in America. He explores all the possible causes, in a non-ideological way, and then discusses why it all matters. Among the factors at play: taxes, overseas manufacturing, lobbyists and Wall Street. Check out this graph below to see how the share of the top 10% has grown over the last 40 years.

The second article is Matt Bai’s piece in the NY Times about Linda McMahon’s campaign for senator of  Connecticut. Bai explores how a staid, preppy state like Connecticut could possibly elect a cartoonish figure like McMahon, who based on her public statements seems utterly unqualified to be senator. He discusses the long-term trends, including white flight and the loss of industry, which lead to young adults leaving the state and public sector unions gaining power, which leads to a weakening of the traditional political system, which leads to wrestling impresarios running for senate. It’s a long article, but nuanced and thoughtful and well worth reading.

Regular readers of Thoughtbasket can probably imagine how I feel about private equity guys lobbying to have their carried interest taxed at capital gains rates instead of income rates. I could explain my position, but why bother when Paul Kedrosky has written such a great post here.

I point you to this study (from October of last year, but as new to me as a never before seen rerun of 30 Rock) from the Center on Budget and Policy Priorities, which shows how the proportion of national income accruing to the top 1% of households is as high as it has been since the Great Depression. I encourage you to read the entire study, or just look at the graphic below, which sort of says it all. 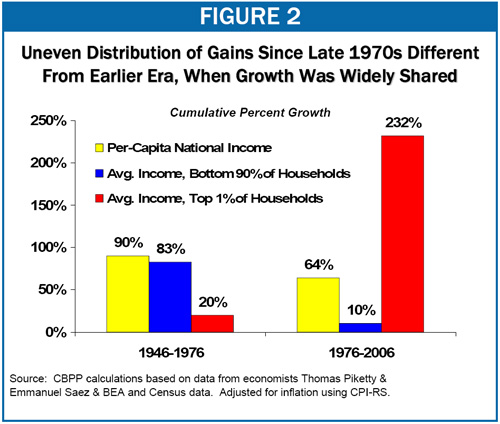 It deserves notice that there are a few Republicans who are taking income inequality seriously and see it as something which needs to be addressed.

David Frum wrote an article in Sunday’s NY Times about how regions with high income inequality tend to vote democratic. He pointed out that if Republicans don’t address growing inequality, they will keep losing districts. Politically expedient, yes, but Frum has written an entire book on the need for a more compassionate conservatism.

Atlantic editors Ross Douthat and Reihan Salam also have a book out: Grand New Party: How Republicans Can Win the Working Class and Save the American Dream. And Minnesota governor Tim Pawlenty, who was reputedly on the shortest of short lists to be McCain’s VP, is credited with coining the term “Sam’s Club Republicans.”

Are these guys purely recognizing that working class whites are a bulwark of the Republican base, and therefore must be helped? Or do they actually recognize a moral or fairness problem with growing income inequality? I don’t know, and I haven’t read their books yet to find out. But either way, they are rare, and should be saluted at the very least for thinking differently.

Plus, I am about to start a series of posts that will attack Republican thinking and policies, so I feel like I should say something positive first.

Princeton economist Alan Blinder wrote an op-ed in the NY Times recently describing a new study that showed income inquality increasing during Republican administrations and decreasing during Democratic adminstrations. This pattern goes back for the last 60 years. The study also notes that the economy has grown faster under Democrats during the same 60 year period.

Although Blinder has worked in Democratic administrations, he is a big deal economist. His textbook Economics: Principles and Policy, written with William Baumol, is a classic, which I used as an economics major in college.

It isn’t often that I read two articles about income inquality in one day, let alone in publications as disparate as the Wall Street Journal and Harvard Magazine. But yesterday was just such a day, and it inspired me to write about these two articles.

Then Harvard Magazine did a long survey of research by various Harvard professors on income equality and its impact on people and society. There was so much in this article that I don’t even need to comment. I am merely going to summarize some key findings and encourage you to read the entire article, which is available free online.

E) States with the largest black populations have the least generous welfare systems.

There is both additional data and analysis in the full article. The article does not, however, show the methodology behind any of these studies. But I will note that all the studies were done by Harvard professors, who are generally pretty good at this stuff.