The Benefits of Financial Regulation

Harvard Magazine recently published an article regarding bank regulation. Like many articles (in fact, like the vast majority of articles I’ve seen), it makes the case that the current situation virtually guarantees another financial meltdown, since all major financial institutions now have implicit government backing, under the “too big to fail (TBTF)” doctrine. However, this article is a little different than many because it’s written not by a journalist, but by David Moss, a professor at Harvard Business School, which is, of course, the main source of the overconfident financiers who created the recent meltdown.

Professor Moss suggests a number of solutions to the TBTF problem and the moral hazard it creates. Most of these suggestions revolve around making the implicit guarantee an explicit one, with transparent limits and with the government charging for the guarantee. He would also add a tight regulatory regime.

The most interesting thing about Moss’ article was the graph I’ve inserted below. This graph has the date on the X axis, from 1864 to 2000. The Y axis shows the number of bank failures during each year. As you can see, bank failures were a regular occurrence in the American economy until 1932, when in the wake of the Great Depression a whole series of regulations were implemented, including Glass-Steagall. Then there is a long, calm period with very few bank failures, running up to the early 1980’s, when bank deregulation began under the Reagan administration. This graph speaks volumes. 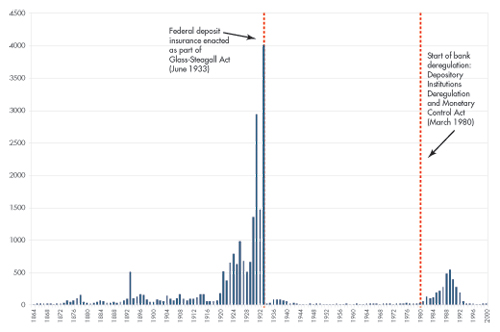 Bank CEOs and Republicans are arguing strenuously against new bank regulations. CEOs have a good reason: they want to make as much money as possible. But Republicans are fighting regulation simply because they have an ideology that regulation is inherently bad. I think the last two years have proven this ideology wrong, but even if you don’t buy that, it’s hard to argue with the chart. So the question for Republicans is whether they are going to look at 136 years of data, or listen to the anti-government ramblings of people like former exterminator and creepy dancer Tom Delay, or fact-hindered quasi-philosopher Ayn Rand?